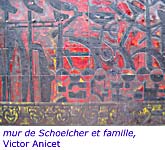 The original inhabitants of all these islands were the Saloïde Indians who originated in the Orinoco basin in South America. Later, the Arawaks and then the Carïbes, now known as Amerindians as are tribes in North America such as the Navajo, the Ojibwa, the Hopi and others, arrived from South America. Although the Carïbes fought fiercely against the invading French, those who did not die from overwork and lack of disease immunity were either killed or allowed by treaty to find asylum on the island of Dominica. Today, many writers and artists from the Caribbean region study the traces left behind by their Amerindian predecessors and incorporate elements of this heritage in their contemporary literature and art.

These writers and artists also study and acknowledge their connection to the African Diaspora, the spreading of Africans throughout the world, especially in the Americas. The influx of Africans occurred in the French Caribbean region when France created sugar plantations on the islands and brought in boatloads of slaves to work the cane fields. By 1745 Martinique had 60,000 slaves and 16,000 whites, while slaves on Guadeloupe outnumbered the whites in even greater proportions, as in Haiti where the proportion was ten to one. Slave owners systematically separated Africans from the same village and put them with Africans from different villages so that they would not have a common language, for fear of rebellion. Paradoxically, this helped engender the Creole language. The slaves’ living conditions were abominable, and the whip of the mulatto overseer hired by the French plantation owner (called “Béké” in Martinique and Guadeloupe) was quick to lash out at any insubordination. The infamous “Code Noir” of 1685, promulgated by Louis XIV, provided for specific punishments so severe they included cutting off of a hand, a leg, severing the Achilles tendon and death.

Despite the dangers, numerous slaves took to the hills and became runaways, known as “maroons.” Derived from the Spanish word “cimarròn” meaning “runaway,” the term maroon is used in all parts of the Caribbean to describe runaway slaves and the independent communities they formed. Many maroons attacked plantations, instigated revolt and undermined the system of slavery in every way possible, as did their counterparts throughout the Americas. The symbolism of the maroons is a central theme in Caribbean literature as is the entire history of subjugation by slavery. It must be added that the authorities took advantage of certain maroons who collaborated with them, gave information and even helped return escaped slaves.

In Saint Domingue, modern-day Haiti, abolition began in the north of the island in 1793 under Léger-Félicité Sonthonax, the French Jacobin who controlled the 7,000 troops sent to Saint Domingue during the Haitian Revolution. Although he did not originally intend to free the slaves, he was forced into doing so to maintain his power. The Revolutionary “Assemblée” had voted (and revoked, and then voted again) for mixed-race persons to become citizens, in 1791 and 1792. The decree of abolition on February 4, 1794 was a fait accompli already in Haiti, and did not affect Martinique, which was under English occupation at the time. Due in large part to insurrections instigated by maroons, including major slave revolts in Martinique and Guadeloupe, the French Revolutionary Government outlawed slavery in 1794 in all the colonies only to have it forcibly re-imposed by Napoleon in 1802.

In 1801, Toussaint L’Ouverture, the acknowledged leader against the British, conquered Saint Domingue, because the island’s nearly half million slaves revolted under his leadership. 1802 is a very important date: Napoleon sent Richepanse and his troops to Guadeloupe and Leclerc to Saint-Domingue. Delgrès et al. were defeated in Guadeloupe, Toussaint was captured in Saint Domingue, and this led to final battles toward independence.

After the hard, prolonged and violent struggle that had begun in 1791, Haiti claimed its independence and declared itself the world’s first black republic in 1804. The power of this feat, that exploited and coerced slaves in a colony successfully liberated themselves and radically transformed the social, political, intellectual, and economic life of the colony, electrified the entire African Diaspora as well as the rest of the world. Despite the abolition of slavery, however, the new nation was living under horrible debt payments imposed upon it by France. In fact, Haiti paid France dearly for its freedom (and to reimburse the slaveowners!) from 1825 until well into the 3rd Republic.

Influenced by more slave uprisings in the Caribbean and by sustained lobbying by Victor Schoelcher, a Deputy from Paris, and other abolitionists, the French National Assembly finally abolished slavery in the remaining colonies of Martinique and Guadeloupe in 1848. However, the “mother country” still tried to form its overseas citizens into little copies of metropolitan and Christian French citizens through its assimilationist colonial policy. Until recently, all French Caribbean children, just like their counterparts in France, had to memorize the phrase “Our Ancestors the Gauls” as part of their schooling in history, whether their predecessors were African, East Indian, European or a combination thereof. A marked difference seems to exist in the English and Spanish Caribbean areas where the governments maintained a distance and strong class distinctions among its citizens. Of course this colonial story was the same in all of “French” Africa and we should note that Martinique and Guadeloupe are tiny little specs on the enormous colonial map. This fact actually makes it all the more significant that such a rich body of literature has developed in the French Caribbean.

The experiences of studying the traditional French syllabus and of measuring themselves against French values continues to create self-esteem problems among French Caribbeans even to this day. Although Guadeloupe and Martinique became French Departments in 1946 in an effort led by Aimé Césaire, an acclaimed poet, a Senator to the French National Assembly and Mayor of Fort-de-France for 56 years, the lives of the citizens have not improved nearly as much as political activists hoped. Ironically, Césaire’s poetry urges his fellow citizens to rise up and defy the colonizers, but his political leadership resulted in supporting assimilation that further entrenched French domination in the society. Nevertheless, celebrations of their ancestral heritage and of a uniquely Caribbean cultural identity flourish in the works of most contemporary writers and artists. This is true despite the fact that the basic infrastructure remains French and political autonomy has not been achieved.

In speaking about Aimé Césaire, it is important to note that he and two fellow students in Paris, Léon Gontran Damas of French Guyana and Guy Tirolien of Guadeloupe, launched a literary journal called “L’Etudiant Noir.” In 1935 Césaire published a passionate tirade against assimilation in the journal in which he coined the word “Négritude.” Influenced by the Harlem Renaissance, Négritude can be compared to what became “Black Power” in the United States. Both movements validate the importance of ethnic roots and the need to honor an individual’s heritage.

Frantz Fanon, a Martinican psychiatrist, defined the problem posed by these post/colonial patterns of self-alienation in Peau noire, masques blancs (Black Skin, White Masks) as early as 1952. Most writers and artists from the region, including those in our video interviews, confirm that Fanon’s analysis remains pertinent today even as they interrogate the shape and boundaries of the contemporary French Caribbean experience.

Although many differences exist among the citizens of the French, English and Spanish Caribbean areas, those individuals with African roots share strong cultural bonds of origin and resemblance with the other members of the African Diaspora whose ancestors also endured the horrors of slavery. This wide African Diaspora includes citizens in many parts of Africa, Canada, Great Britain, the United States and in countries in South America such as Bolivia, Brazil, Colombia, French Guyana, Peru and Venezuela. And after more than two centuries of cultural transposition, the language, food, music, and culture of former slave-owning countries are all influenced by transcultural pollination.

Uneasiness linked to economic and political domination by France exists in the French Caribbean islands alongside longstanding movements for autonomy and independence. Present-day writers and artists continue to work to break the cultural and economic stranglehold of the “métropole.” The outsiders’ myth of the Caribbean as an exotic, island paradise with carefree inhabitants conflicts with dire economic and social problems in the entire area. Tourism and recreation on stunning beaches under skies of brilliant blue bring visitors to the region in large numbers. France works hard to promote this tourism, and among those who respond eagerly are metropolitan French citizens, other Europeans and Japanese.

Unfortunately, a bitter reality lurks beneath this idyllic scene, despite the fact that the standard of living in the French Caribbean is probably the best of any of the Caribbean islands. Unemployment in Martinique and Guadeloupe is at 25%, poor planning results in traffic jams that require many commuters to spend as much as three hours getting to work, very little material is recycled, heaps of trash clog parts of the towns and cities, and shanty towns and decaying buildings mar the lush countryside. Social differences are intensified by a marked prejudice against those of darker skin. In truth, similar patterns are paralleled in much of the rest of the Caribbean, patterns that are exacerbated in the French Caribbean by Department status and the European Union and in the Dominican Republic, Puerto Rico and Cuba by immigration policies.

Haiti, unlike Martinique and Guadeloupe, is a full-fledged country in its own right. However, as writer Edwidge Danticat observed in 2005, “some of the conditions that existed in 1915 (when U.S. forces invaded Haiti and launched an occupation that lasted 19 years) are still present today: rampant insecurity, political uncertainty…” Less than half the children attend primary school, unemployment is more than 30%, half the population is younger than 20, and the country is said to be the poorest in the Western Hemisphere. Haiti has a long-standing tradition of vibrant independence among its writers and artists, and that is carried on today both by individuals living in Haiti and those in large communities abroad, especially in the U.S. and Canada.